/ Home Blog All Interview Scott Blakey: My mother plants are older than my kids

Interview Scott Blakey: My mother plants are older than my kids

You’ve got a really lovely place here in Lugano. Life must be great here.

I am hardly ever here, I am travelling basically non-stop because I don’t trust most people, I go straight to the source, I knock on doors and ask questions myself even up to this day. The advantage of being an Australian compared to most Europeans is that thousands of kilometres is nothing for us. I can get into my car, drive one thousand k. to have a dinner and then drive back the next day. In Europe, people didn’t talk to each other even when they were only 100 kilometres away. But my power has always been finding people and putting them in the spot. During past six months I have been everywhere – Australia, Norway, Spain, Holland or Portugal, where I’ve got a new licence for 500 hectares farm. Tomorrow I have some Australian guys coming who want me to sign consulting for them. It’s just happening everywhere. 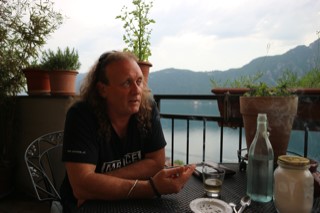 You are one of the most famous cannabis breeders in the world, but when I tried to look you up on the internet, it was hard to find more than a handful of articles and videos. You don’t like crowds, fame and attention?

Rather the opposite. People have to come to see me. I live in the back corner of Europe and I am quiet here. I write my articles, do my things, enjoy my kids who got bigger now so I can “run around” a little bit more now. I think I am in a good stage of life when I can start re-enjoying myself, but no, I am not and I have never been looking for fame.

When and why have you left your country of origin?

I left Australia a fair few times as a young university student and visited Asia or South America. I left for good in 1989, however it wasn’t planned, I just wanted to travel the world for a year or so like every other Australian. But I fell in love with travelling, I started hitchhiking around Australia, then went to Indonesia, Thailand, Burma, India, and ended up in Holland, where I started trading gemstones.

You weren’t selling cannabis or seeds by then?

No, I was just collecting cannabis and other plants’ seeds, which I started already as a young kid. And I still do, to this day I have some 50 different land race seeds still to be worked on. And since I’ve always smoked cannabis, it was a natural thing for me to collect its seeds.

What about your education, did you finish school before leaving Australia for good?

I finished my studies at Melbourne University where I received Bachelor of Science in plant biology and sport psychology – I had double major. Originally I thought I would stick with psychology, but I never did, because I started travelling. 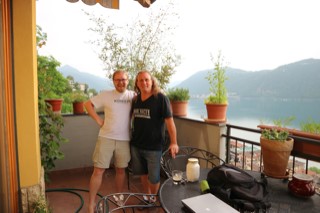 How did you make your living these days?

I used to go up to Mullumbimby and buy cannabis there, then take it down to the university and sell it. As a young guy I found it difficult to get experience in the workforce when you had no experience and they were all looking for experienced people, so I did what I was good at.

What does Shantibaba mean?

Many years ago I was in India at Ashram in Poona attending what they called multiversity there, I just had a motorbike, and a girlfriend and I used smoke chillums with the saddhus. One day they starting calling me Shantibaba, because shanti means peace and baba means person, so Shantibaba equals peaceful man. They kept calling me “shanti, shanti, shantibaba” so it somehow stuck with me. Later I started a company called Shantibaba Enterprises and I have been using it as my writing name in magazines, etc. Also the initials resemble my real name Scott Blakey – SB – Shanti Baba.

In Czech Republic, the vast majority of canna people know you simply as Shantibaba.

I often meet people who say “hi Scott, nice to meet you” and talk to me about a guy called Shantibaba, and I tell them “you are not going to believe it, but that’s me” and they go “nooo, he is six feet tall, he is a fucking mountain” and I say “well, that was a few years ago”.

When you arrived in Holland for the first time, you had no intention to start growing and breeding cannabis?

No, I had no idea. I went from Delhi to Amsterdam in 1990 and I had an address of one friend in Leiden. So I tossed a coin whether I go to youth hostel in Amsterdam or visit my friend, and Leiden won. This friend of mine had a job in a greenhouse, but I didn’t start to work there, because I had all these gemstones and I was hoping to sell them in some shop in Amsterdam. Along the way I have met many funny characters, some of them helped me, they rented me a house and so on. That is how the story begun – you think you are starting ((with)) one thing and you end up doing fifty other things, and suddenly doors start opening and things start evolving.

How did the legendary Green House Seeds company come into existence?

Arjan Roskam had already got one coffee shop in Tolstraat street when I first came to Amsterdam. Together with our partners we then built, decorated and opened up two more coffee shops Waterloo Plein/ Then I wanted to start a seed company so, in 1992, we started fitting a big farm outside of Amsterdam and, in 1994, we founded the Green House Seeds and hit the market with White Widow and all of the other strains. These were great times, but it is all history now.

So that was when you finally made use of your collection of seeds from all around the world.

Seeds and plants. But there were many different people involved, lots of knowledge shared. These were the days David Watson, Samand Neville etc. Everybody was sitting around enjoying discussing breeding and coming up with new ideas, areas to visit to pick up seeds and so on. The nineties were the golden years in Amsterdam, it was fantastic. We were all friends, although there were some differences.

You met Neville Schoenmakers, who was also from Australia, before you met Arjan?

First I met my girlfriend, who was working with Arjan, in 1990, and we got all together and worked together from 1992 to 1998, when I sold my share in Green House and moved to Switzerland. I met Neville in Amsterdam the same year as Arjan, and we became really good friends because we had so many things in common – like breeding coy carp, as well as different varieties of birds.

Complete interview was published in digital magazine Cannabis Therapy no. 2 at www.cannathemag.com and www.issuu.com.

Are you more than
18 years of age?